Simply, no we don’t really.

I know this post is a little over due but I thought I still may as well write it as I’d like to try to keep you all as up to date as I can through my medical life.

Back in May I had my much awaited first Gastro Appointment in Cardiff with my new Consultant. Before I go into this though I shall rewind a little more to catch you up.

Firstly I have had some of the issues I am going to talk about for a long time. It is just that the severity comes and goes. However, it was around this time last year that things started to decline beyond what I’ve experienced before.

I lost my appetite, I became full extremely quickly, I was nauseous all the time, I started to vomit frequently, Somedays I wasn’t able to keep down food or liquid. I found liquid far worse to keep down. I began to lose weight, swallowing food became really painful, food would get stuck in my throat sometimes for several hours and I could often choke on my food.

I had been having a lot of stomach problems and issues with my throat and acid reflux previous to this therefore, I was under a Gastro Consultant as well as a Speech and Language Therapist.

I was under a great Gastro Consultant, Dr. Evans she order many tests to try to get to the bottom of the issues. I had a Gastroscopy (a tube they put down your throat to have a look). I had a Barium Swallow which consists of drinking Barium (Liquid Concrete as they called it) then they take x-ray’s to see what’s going on, they move you around on a bed/table to… as lovely as it sounds, to see if they can make you reflux. I also had a 24 hour pH Study.  This measures the acidity in your stomach with a tube that goes through your nose and I have a little pack that is connected to the tube to report when I feel unwell etc. However, the most important test I had was the one that no one told me I was having! This came the day I had the 24 hour pH test. They did this test before placing the nasal tube for the pH study. It was a larger nasal tube and it allows them to see how your swallow works. You eat some bread and drink some water. It was this test that diagnosed my Oesophageal Dysmotility.

This test showed that my swallow doesn’t work as it should or as a “normal” person’s throat should work. Essentially this means that 70% of the time my throat doesn’t work together. Your throat works by squeezing the food down the oesophagus as it squeezes through one bit the other opens to let it through and so on. However, mine doesn’t work like this, it opens and closes randomly so it doesn’t work together. Then 20% of the time the top of my throat pre-empts me swallowing which means that it often closes off before I swallow making it extremely difficult to swallow. In conclusion, yes, my body just doesn’t like to work for me.

Following testing and 3 monthly appointments with Dr. Evans we decided that something more needed to be done. I wasn’t always able to eat, I was dehydrated – I had a few trips to A&E for fluids, I couldn’t take my meds or take them safely. This is when Dr. Evans decided that the best way forward was a feeding tube. A PEG to be exact.

A PEG is a feeding tube that would go straight into my stomach via a stoma (a small hole made into my stomach). The plan was that I would be admitted for 2 weeks to have a NG, a nasal tube to my stomach to see how my body tolerates feed, fluids and medications this way before we go for a more permanent procedure. The idea was I could put my medication through the PEG meaning I don’t have to worry about swallowing them and there’s less risk I would bring them back up. I could have regular probably daily fluids through it and feed ( a formula that acts as food with all the nutrients etc that we need) I would use this as and when I need it. So if I was going through a flare, not tolerating food or I was unable to eat enough then we could make it up with feed.

However, before we started this plan I moved to Cardiff…

Now I am extremely happy and so pleased with our move to Cardiff but it has put a spanner in the works as such.

When we arrived in Cardiff the GP’s tried their best to get me seen ASAP. After another A&E trip for fluids and several months of dehydration and vomiting I finally saw my new consultant.

I’ll be honest, I’m not sure what I think yet… He’s supposably the best in the Gastro Team and very good at his job. So, I’ve got to have some faith in him but it’s hard to do that when you’ve finally got your head around quite a big change and decision but you’re super excited to be living a better quality of life and then he says ‘no’.

Unfortunately he hadn’t spoken to my previous consultant at this point nor did he have all my notes meaning he didn’t fully understand. I am aware I am not a typical case but, when am I? I struggled to make him understand that fluids and medications are my biggest issue. He also told me ‘You don’t look that sick’ – I love being told this by the people that are suppose to realise we are sick and make us better. Essentially though, he doesn’t understand why we were going for a PEG, he didn’t understand my swallow issues and he wasn’t keen on the idea of the procedure when I am not underweight but in fact above what my BMI should be according to the NHS.

He did eventually say he wouldn’t complete rule it out but I think we all know this is like when your mum says ‘I’ll think about it’ when you ask for something as a kid.

He wanted to do some more tests, so more tests is what I have been doing however, if I am just re-doing some of the ones I’ve already had before for him to say they’ve been done in ‘his’ hospital then I will not. be. impressed.

He asked that I have a Gastric Emptying Study, to do this I have to eat some ‘lovely’ (they weren’t all that bad) hospital scrambled eggs with a radioactive substance in, then over 2 hours they take a photo/xray with a Gamma Camera every 15 minutes to see if my body is moving food too slowly or too quickly. I do know that my body is working too slowly as we had to extend to 2.5 hours but that was as much of an extension as they can give.

I also had to have another Barium Swallow as I spoke about earlier. This wasn’t very fun at all and it doesn’t look like anything’s changed.

He’s also asked for a ultra sound of my stomach due to the stomach pain I’ve been having which I’ve had and nothing obvious showed up.

The last test I will have is what diagnosed my Oesophageal Dysmotility, where they use a nasal tube with a camera to see how the swallow works. Annoyingly this test was the one I’ve been waiting for the longest!

*Edit – They have now also told me that I have to have the 24hr pH study again too!*

I saw my consultant on the 31st July so I was pleased that 3 out of 4 test have been done but I was frustrated that the test the diagnosed me hadn’t yet been done.

I was extremely worried for this appointment as I hadn’t had my final tests but also because my solid intake has been a little better and sadly this is what he seems to focus on the most. Despite it not being my biggest and most concerning issue. 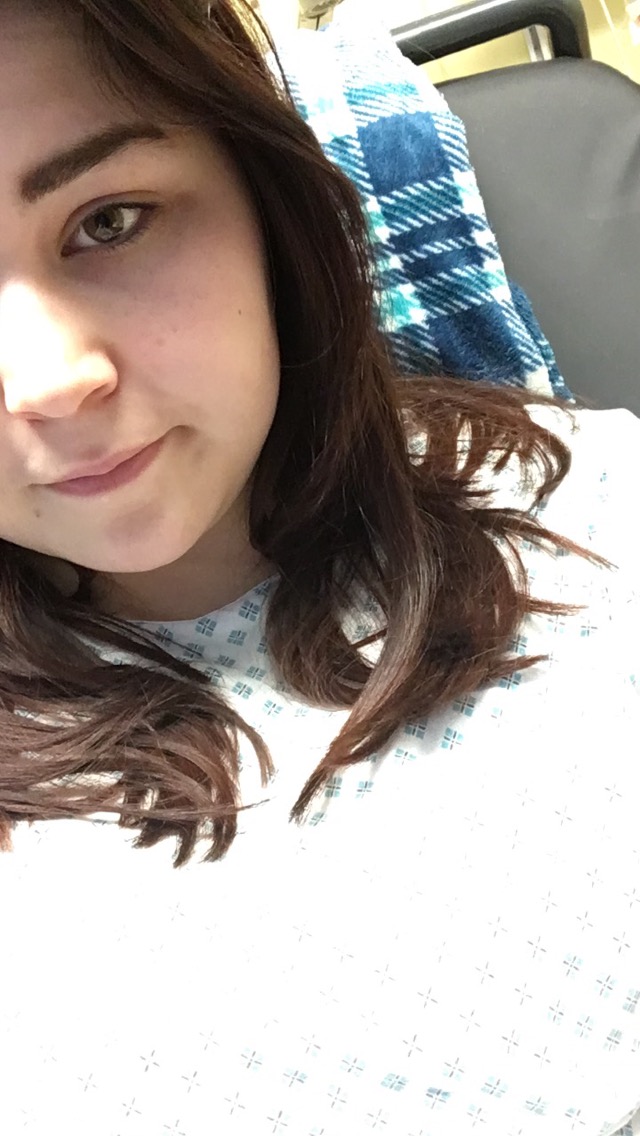 The appointment was similar to the last where he has no idea what to do. He feels that a PEG is not the right option for me and was keen to see what the other tests would say. I tried to ask him what our options are depending on the results. However, as always, he doesn’t know.

He has also referred me to a dietician who I don’t see until November. I am please that he has at least referred me to someone with potentially more knowledge on my conditions and more experience however, changing what I put inside my body is not going to magically fix my lack of abilities when it comes to swallowing, but like everything else I’ll give it a go!

As well as this he has asked for as many of my medications to be turned into liquids or dissolvables. I knew that this was unlikely to work. It is a conversation I have had many times with many different people because liquids Do. Not. Work. For. Me. So, giving me my meds in liquid form. Will. Not. Work. However, he was pretty insistent so I said I would try and there was a part of me that had to believe it would work because what other options do I have? However, I have tried this and I can say with the upmost, absolute confidence that this… did… not work. In fact it just made my symptoms at least 5 times worse. If you follow me on Instagram (@worldin_mywords) then you will be fully aware of this. I will possibly write about my experience with this but I decided its a post for another day.

I tried so hard to advocate for myself and honestly I think I did do a good job but he just doesn’t want to hear it. He essentially sits and stare whilst I talk then just waits of me to leave. I explained to him how long these issues have been going on for and how much they impact my quality of and daily life but it just doesn’t get me anywhere.

Appointments like this are exhausting, emotionally draining and honestly, quite concerning because I need to know that someone is trying to help me and is trying their damn best to do so. No half arsing it, no looking for easy solutions because I afraid that easy is not a term my body knows.

My manometry and pH study take place next week which I am really not looking forward to but I gotta do it. I will of course let you all know how it goes and I will post regular updates on Instagram and (possibly) Facebook (I often, sort of, forget about Facebook) and I am sure I will write a blog post or incorporate into one soon.

Otherwise for now you will find me with my fingers, toes and every other overly bendy joint I have crossed hoping that my consultant comes up with something, preferably something good that works by my next appointment mid October.

So, now you are all caught up I will try my best to keep you all updated as we go along.

If you have Oesophageal Dysmotility then please let me know if you have any tips, tricks or good treatment plans.

I hope you are all having as good a day as possible.